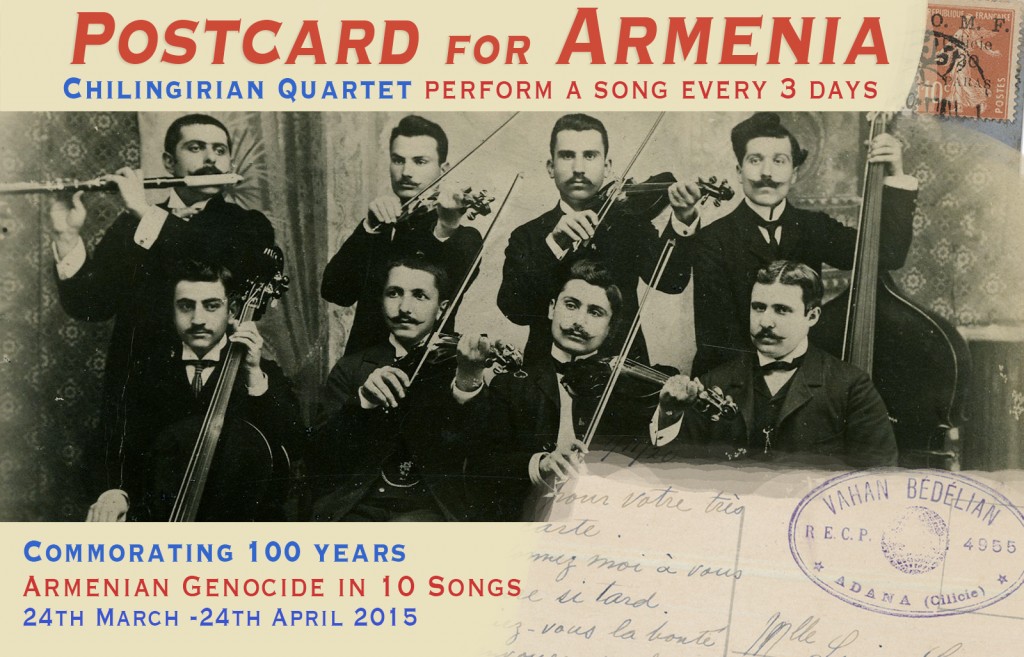 This year marks the centenary of the Armenian genocide, which saw the systematic extermination and displacement of a million and a half Armenians by the Turkish state in it’s attempt to rid the Ottoman Empire of an entire Christian people. Such was the scale and cruelty of this genocide that Adolf Hitler himself referred to it when he was preparing to invade Poland, exhorting his generals to be merciless and brutal: “Send to death mercilessly and without compassion men, women and children…Only thus shall we gain the living space we need. Who, after all, speaks today of the annihilation of the Armenians?”

During the early years of the 20th century and leading up to 1915 an Armenian priest named Komitas was collecting folk songs in much the same way as Bartok and Kodaly did in Hungary – recording and transcribing for posterity the music of the Armenian people. Komitas survived the purge physically, but was mentally destroyed by the experience and spent the rest of his life in anguish, eventually dying in a Paris asylum. Among the Armenian diaspora were many musicians such as the family of Levon Chilingirian, the leader of my quartet, who fled to Cyprus. Also among these was Sergei Azlamazyan, an Armenian cellist and composer and co-founder of the Komitas Quartet who eventually settled in the Soviet Union. Azlamazyan wanted to be able to perform music from his homeland and so arranged for string quartet a number of songs from those collected by Komitas.

My quartet decided it would be a fitting tribute for this important anniversary to film performances of ten of these songs and release one song every three days leading up to the official commemoration day of 24th April. Along with the films there is a wonderful archive of photographs from the family album of Levon Chilingirian and his wife, also Armenian. Levon was the nephew of the great violinist Manoug Parikian, who appears in some of these rare and precious photos. The performances of the songs are interspersed with archive pictures, and the two together make a most poignant and touching record. The songs were filmed in the Armenian church of St Sarkis in London, and the project was devised and produced by filmmaker Kevin Laitak.

There is nothing quite like music to evoke the spirit of a people, the intangibility of which tells certain things more eloquently than words. In music we hear suggested the pattern of language through rhythm, inflection and articulation; the essence of a people’s relationship with dance and movement born from physical activity and labour (think of all the spinning, threshing, ploughing songs…); the overarching mood and disposition of a nation’s psyche. It is a call to the senses in a very direct way, bypassing the cerebral and overtly conscious. Folk songs are passed down through generations as an aural tradition much as the art of playing an instrument is passed down from master to student, by example. So classical musicians revisiting folk song are reminded of the building blocks of their own musical tradition which over time naturally evolves into something more sophisticated, abstract and self-conscious through its refinement. It’s good to make that journey back to one’s cultural fatherland once in a while.

These particular songs are a joy to play. As violist in a quartet my role in repertoire like this would for the most part be fairly fixed and determined. I would mainly be accompanying in the traditional way, providing harmony, texture and rhythm. But happily the viola part has been quite generously provided with solos in these songs, used as it were as an alternative vocal line – the contralto perhaps. The joyful Vahan-Bedelian (1) “hoy Nazan Im” is a boisterous greeting song where the viola stabs through with syncopation and bubbling, rippling lines.

'Shoushigi', dedicated to a little girl, features a most warm and loving melody which is taken over by the viola for a whole verse. I adore playing this one, with its lilting dotted rhythms and sweet line. In some songs, such as 'Al Alayloughs', the viola has the last word, reminiscing the melody in a more wistful way to round off the song. Quite often the viola makes melodic interjections and commentary, such as in the lugubrious middle section of 'Shogher Djan', dragging the other instruments as if by gravity into the deep viola voice. At other times it provides waves of the most rich and searing harmonies – delicious and seductive
.

'Kelly Kelle' is a conversational song about a woman’s admiration of a man’s walking gait! The viola strides along with the main melody, radiating vibrant warmth from the lower strings. Just because the register of the viola is lower than the violin’s doesn’t mean it necessarily depicts the male character – to me it is a deep and mature woman’s voice.

'Karoun A' – the sad Spring song which speaks of a young lady who loses her love. The viola seems to be mourning, weeping long sorrowful notes over and over. 'Echmiadzni Bar' is a wild dance, very eastern in character, throughout which the viola plays the same tune as the violin but an octave lower. It is tough and gutsy, later becoming dreamy and filigree, then bursting back to its former punchiness.

'Haprpan' – a boy/girl song, full of conversation and fun, loving and longing. The viola is very busy with rhythms both bowed and plucked as well as the occasional cheeky interjection. The remarkable thing about these songs is the absence of awkwardness in marrying one form – folk song – with the medium of classical instruments. There seems to be no fault-line between the two elements, the best of each shining with ease and without compromise. There is richness, there is simplicity. Azlamazyan uses the instruments in a quite classical way without ever resorting to over-folkiness, yet we are without a doubt hearing folk music.

This has been a most powerful and fulfilling project. These songs are important because they are a magic thread that links us to a society that was all but obliterated. It’s astonishing how the songs together with the images connect us in a very human way with a terrible history that is not widely known in the West. We’ve had incredible feedback on the films, so the last word is from Arderne, one of the many people who wrote to us: “The music is so vibrant and sparkling, which is the more poignant when you consider the horrors which were to overtake these people. It has been a revelation and a joy.”